Jamal Adams is staying with the Jets, but not for a lack of interest. Before the deadline, the Ravens tried to swing a trade for the Pro Bowl safety, Adam Schefter of ESPN.com tweets. 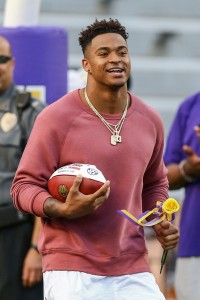 Ultimately, the two sides couldn’t come to terms. It was a similar story for the Cowboys, who also engaged in an aggressive pursuit of Adams before the bell rang.

The 1-6 Jets worked the phone lines in recent days with hopes of parlaying their best talent into future draft capital. Even after dealing defensive lineman Leonard Williams to the Giants, they were nowhere near satisfied: quarterback Sam Darnold and defensive tackle Quinnen Williams represented their only untouchable players, Ralph Vacchiano of SNY (on Twitter) hears.

The Jets will move forward with Adams, running back Le’Veon Bell, wide receiver Robby Anderson, and the other notable names they had at the start of business on Tuesday. Ultimately, Jets GM Joe Douglas wasn’t able to completely dismantle the team he inherited, but that ultimately might be for the best.

6 comments on “Ravens Tried To Trade For Jamal Adams”