Antonio Brown‘s interview Thursday with NFL investigators went “as well as it could have,” a source briefed on the meeting told ESPN.com’s Dan Graziano (on Twitter). Brown, the source says, was open and forthcoming about his actions, while presenting his case well. 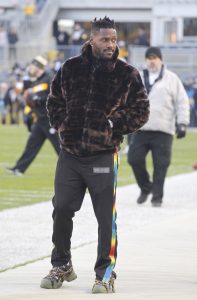 [RELATED: Antonio Brown Not Expected To Play In 2019]

Brown is still awaiting discipline from the league and Graziano gets the sense that it will not come before Week 12 of the season. After that point, the league could theoretically hand Brown a suspension lengthy enough to keep him off the field for the remainder of the regular season, plus the playoffs.

For what it’s worth, Brown’s agent, Drew Rosenhaus, continues to insist that Brown will suit up for an NFL team this year.

“I’m confident Antonio will play again this season. I believe the NFL should clear him after they interview him this week and I expect he will be signed shortly after that,” Rosenhaus said recently.

Meanwhile, Brown is battling for nearly $40MM in lost wages from the Patriots and Raiders and facing a lawsuit filed by one of his accusers, Britney Taylor. Even if Brown does not return to the field in 2019, he’ll have a busy schedule over the next few moths.