The Broncos have claimed cornerback Cyrus Jones off waivers from the Ravens and are waiving fellow defensive back Coty Sensabaugh, tweets Field Yates of ESPN.com. 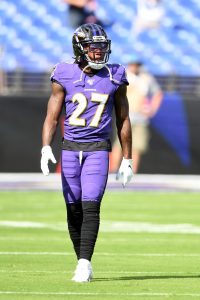 Selected by the Patriots in the second round of the 2016 draft, Jones has now completed two separate stints with both New England and Baltimore. Nominally a corner, Jones has only played nine total defensive snaps this year. Instead, he spends most of his time on special times — he was the Ravens’ primary punt returner this season, averaging 9.4 yards per return on 12 attempts. Jones could take over for Diontae Spencer as Denver’s return man, and may also add depth in the secondary.

Sensabaugh, 30, appeared in four games for Denver after signing off the street in October. While he’s probably not a household name, Sensabaugh was a fairly regular starter for the Steelers over the past two seasons, starting four games at the tail of end the 2017 campaign and 10 more last year. Football Outsiders was a fan of Sensabaugh’s work in 2018, charting him as ninth among qualified corners in yards allowed per pass and 26th with a 56% success rate (meaning he was effective at stopping opposing wide receivers short of the sticks).