The Eagles have waived safety Andrew Sendejo, per a club announcement. Sendejo joined the Eagles in March on a one-year deal, but he won’t get the chance to see it through. 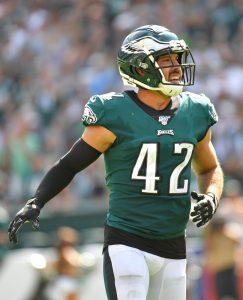 Sendejo, 32, had his 2019 option declined by the Vikings in the offseason. The move was largely expected after the veteran lost much of the 2018 season to a groin injury. After Sendejo exited the Vikings’ rotation last year, their defense actually improved. In his wake, the Vikings used Anthony Harris, George Iloka, and Jayron Kearse to hold down the fort and saw better results. This year, Sendejo tallied 26 tackles and one sack across nine games for the Eagles, playing mostly as a reserve.

Even though Sendejo is a vested veteran, he’ll be subject to the waiver wire as a post-trade deadline cut.