Cowboys star Amari Cooper doesn’t have a new deal yet, but he still wants to stay in Dallas. On Monday, Cooper responded in the affirmative when asked if he wants to continue playing for the Cowboys beyond this season. 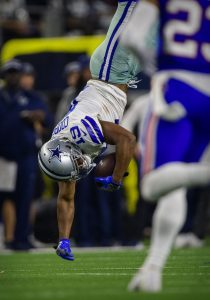 “Like I just said, I love it here,” Cooper said. “I want to be here. I just love this situation, my teammates. I just feel it’s the place for me.”

Since coming over via trade from the Raiders, Cooper has caught 117 balls for 1,696 yards and 13 touchdowns across 21 games. Through 12 games this year, he’s got 64 grabs for 971 yards and seven scores.

“I’ve approached the situation like, if it ain’t broke, don’t fix it,” he said. “Obviously, I’m more productive here than I was in Oakland, so why would I want to change things?”

The Cowboys feel similarly, though they also much weigh the financial implications of a new deal. The Cowboys still have to address Dak Prescott‘s new deal and paying both players at the top of the market will require some serious belt tightening elsewhere. Meanwhile, the Cowboys still have the option of cuffing Prescott through 2020 via the franchise tag.

Cooper’s future is just one of several storylines to watch in Dallas, where speculation about Jason Garrett‘s job security continues to swirl. The drama-filled Cowboys will look to rebound from their Thanksgiving loss when they take on the Bears in Chicago on Thursday night.

12 comments on “Amari Cooper Wants To Stay With Cowboys”