That’s a wrap for John Dorsey. On Tuesday, the Browns and Dorsey agreed to part ways, as Adam Schefter of ESPN.com tweets. 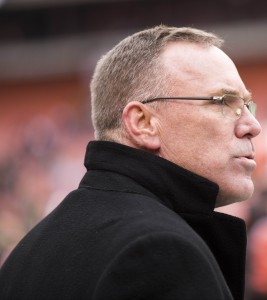 Dorsey and owner Jimmy Haslam met on Tuesday afternoon to discuss potential options for moving forward. Reportedly, Haslam was considering a scenario in which Dorsey would stay on board in a restructured front office. That did not work for Dorsey, an executive with decades of experience who has become accustomed to doing things his way.

The Browns hired Dorsey near the end of the 2017 season after firing Sashi Brown. Brown was widely criticized for his decisions in Cleveland, but his future-minded strategy tee’d up Dorsey with tons of fiscal flexibility and draft picks. In two seasons at the helm, Dorsey has not been able to translate those assets into wins. The Browns improved from 0-16 in 2017 (because there’s only one way to go from there), but they only managed a 7-8-1 record in 2018 and a 6-10 mark this year.

On the plus side – Dorsey is responsible for bringing in the likes of quarterback Baker Mayfield, cornerback Denzel Ward, receivers Odell Beckham Jr. and Jarvis Landry, running backs Nick Chubb and Kareem Hunt, and defensive notables Sheldon Richardson and Olivier Vernon. Dorsey hasn’t been perfect, and his selection of Freddie Kitchens as the team’s head coach obviously didn’t pan out, but one could argue that Dorsey has been given a raw deal and not enough time to right the ship.

What’s next for the Browns is anyone’s guess. The club could give more power to chief strategist Paul DePodesta, who transitioned from baseball to football to become one of Haslam’s top consiglieres. Old friend Andrew Berry – who currently serves as Eagles VP of football operations – could also garner consideration for the GM job.