Derek Wolfe is done for the year with a dislocated left elbow, but he hopes that he’s not yet done with the Broncos. The veteran says he hopes to return to the team in 2020, as Mike Klis of 9News writes. 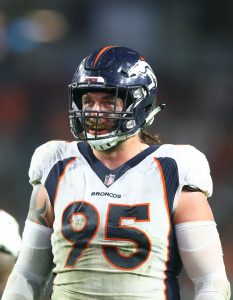 “I know. I’d hate for that to be my last game as a Bronco,” Wolfe said. “That would break my heart.”

Wolfe, 30 in February, is in the final season of a four-year, $36.7MM contract. He made $9MM this season and it’s unclear if the Broncos would have him back at a similar rate. For what it’s worth, head coach Vic Fangio was asked if he wanted Wolfe back and he replied, “Sure.”

Before the injury, Wolfe notched two sacks against the Chargers, giving him a new single-season best of seven sacks. That’s the kind of production the Broncos could use even after their offseason revamp, but they have many tough decisions to make when it comes to their free agents.

They’re expected to make a strong push for at least one pending free agent in safety Justin Simmons, Klis hears. Simmons, still only 26, has started in all 12 of his games this year and currently ranks as Pro Football Focus’ No. 2 safety in the NFL.

8 comments on “Derek Wolfe Hopes To Stay With Broncos”