We heard last week that the Jaguars were considering a major organizational shakeup, with head coach Doug Marrone, executive vice president of football operations Tom Coughlin, and GM Dave Caldwell potentially all on the chopping block. Since then, Coughlin was fired, and Ian Rapoport of NFL.com reports that his dismissal may be the only major coaching/front office change Jacksonville makes. 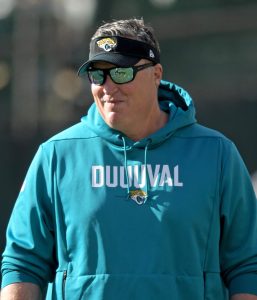 Team owner Shad Khan, despite his apparent predilection for current and former Patriots staffers, would prefer to maintain continuity. Rapoport says the Coughlin firing was well-received in the locker room, and he adds that Marrone had to constantly put out fires regarding Coughlin’s fining system. If his team performs well over the final two weeks of the season, Marrone could be back.

The same goes for Caldwell, whose past couple of drafts have been good enough to give him a chance to be retained. Although the team’s front office will have to somehow deal with Nick Foles‘ contract, the fact that Coughlin is out of the picture has apparently made agents comfortable with having their clients sign with the Jags.

To replace Coughlin, Khan may turn to his son, Tony Khan. Tony Khan currently serves as vice chairman and director of football operations for Fulham Football Club, and he has an analytics-driven approach that would fit in well with the modern game.

The Jags close out the 2019 season with winnable games against the Falcons and Colts.