The Redskins didn’t let him get away. Washington will hire former Panthers HC Ron Rivera as its next head coach and will give him a five-year contract, per Ian Rapoport of NFL.com (via Twitter). The hire will be announced tomorrow. 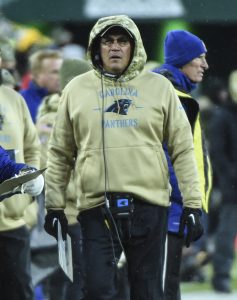 Washington fired former head coach Jay Gruden in October, which allowed owner Dan Snyder to get a jump on the hiring process. That may have been crucial, because when Rivera was let go by Carolina earlier this month, he immediately became one of the most qualified coaching candidates on the market, and he would have had other suitors, like the division-rival Cowboys and Giants. But Snyder, who perhaps realized that his silver tuna acquisition of Mike Tomlin was never going to happen, acted quickly to bring Rivera to Washington and keep him there.

Rivera, who played linebacker for the Bears from 1984-92 and who was a part of Chicago’s Super Bowl XX victory, became the team’s quality control coach in 1997. He paid his dues and moved up the coaching ranks, ultimately becoming the Bears’ defensive coordinator in 2004. But it was his stint as the Chargers’ defensive coordinator from 2008-10 that solidified him as one of the best defensive minds in the game, and he parlayed that status into a head coaching gig with the Panthers in 2011.

The Panthers never captured the Lombardi Trophy with Rivera, but he did get them to Super Bowl 50 at the end of the 2015 season, and he earned Coach of the Year honors that year. Including playoffs, Carolina went 79-67-1 with Rivera at the helm.

Although Redskins QB Dwayne Haskins may never be Cam Newton, Rivera obviously feels comfortable enough with the Ohio State product to accept the Washington job. Indeed, many believed it would be difficult for the Redskins to attract a top HC candidate, so it’s a good sign for Washington fans that Rivera apparently believes in the direction the team is heading. And now that Bruce Allen is out of the building and Rivera is in, perhaps the team can bring in a top exec as well (though Jason La Canfora of CBS Sports tweets that the team may not complete its front office changes until after the draft).

As far as Rivera’s staff is concerned, there has been speculation linking his former defensive coordinator in Carolina, Steve Wilks, to the same job in Washington. Though Wilks is currently under contract with the Browns — and therefore in limbo — John Keim of ESPN.com says he will not be coming to Washington (Twitter link). Indeed, Adam Schefter of ESPN.com tweets that Rivera is targeting former Jaguars and Raiders head coach Jack Del Rio as his defensive coordinator, which could make for a very strong staff in the nation’s capital. Schefter says Del Rio is the leading candidate for the job.

Joe Person of The Athletic says (via Twitter) that Eric Washington and Sam Mills III could be other names to watch for the DC job, and La Canfora says Rivera is likely to retain offensive coordinator Kevin O’Connell.

The hire has been well-received, and given the way Snyder handled the Rivera hire and the Allen dismissal, perhaps Redskins fans can feel a bit of optimism heading into the new year.