Seahawks To Meet With Marshawn Lynch

Beast Mode just might return to Seattle. Marshawn Lynch and the Seahawks will meet in Seattle to discuss a reunion on Monday, sources tell Mike Garafolo, Ian Rapoport, and Tom Pelissero of NFL.com (on Twitter). 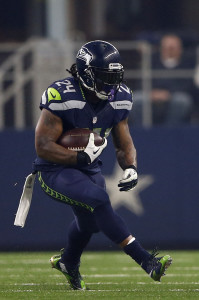 The Seahawks desperately need running back help and are open to pulling Lynch out of retirement. Running backs Chris Carson and C.J. Prosise will likely miss the rest of the season with hip and arm injuries, respectively, leaving them perilously thin in the backfield.

Lynch is undoubtedly rusty, but there are limited options available at this stage of the year. For what it’s worth, Lynch left the door open for a return to the Raiders in May, so he might not be 100% finished with football.

Lynch, 33, saw just six games in an injury-shortened 2018 with the Raiders. In the previous year, however, he appeared in 15 games and averaged a solid 4.3 yards per carry. He finished out that year with 891 yards on the ground and seven touchdowns, plus 20 catches for 151 yards.

Lynch, of course, spent the 2010-2015 seasons with the Seahawks and helped the team capture a Super Bowl ring. Then, in the Seahawks’ following Super Bowl appearance, they opted against giving Lynch the ball near the goal line, which wound up costing them the game.

At 11-4, the Seahawks have already punched their ticket to the postseason. They still have a shot at winning the NFC West as well. Their Week 17 matchup against the Niners will determine the division and could even unlock a first-round bye, if the Packers lose tonight against the Vikings.

12 comments on “Seahawks To Meet With Marshawn Lynch”