Ryan Fitzpatrick To Play In 2020

Dolphins quarterback Ryan Fitzpatrick says he’ll play in 2020 (Twitter link via NFL.com’s Ian Rapoport). All signs have been pointing in this direction and it’s now confirmed, straight from the veteran himself. 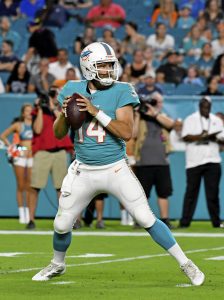 The Dolphins haven’t been shy about their desire to have Fitzpatrick back for another year, even as they plan to draft their QB of the future. FitzMagic, 37, would be the ideal mentor for whoever the Dolphins choose in April and it’s clear that he still has some tricks still up his short sleeve.

In 2019, Fitzpatrick was a bright spot for the Fins in an otherwise trying year. He racked up 3,529 passing yards with 20 touchdowns against 13 interceptions and helped cap off the year in style with wins over the Bengals and Patriots.

Fitzpatrick is under contract for 2020 at an $8MM salary for this upcoming year. Even though he could wind up as the QB2 by the midway point of the year, the Dolphins can afford it thanks to their ample cap room.

Next up for the Dolphins’ QB room – evaluating candidates for the No. 5 overall pick and, perhaps, mulling a trade up to get their man. They’ll also have to figure out how former first-round pick Josh Rosen fits into the picture.