The Panthers have agreed to hire Matt Rhule as their next head coach, according to Pete Thamel of Yahoo Sports (on Twitter). The Panthers came to terms with the Baylor head coach shortly after meeting with him. Clearly, they did not want him to get on a plane to New York and risk losing him to the Giants, who reportedly had him at the top of their list. 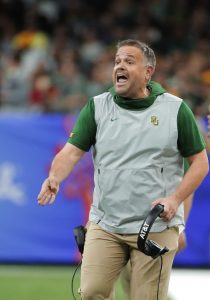 Rhule will receive a seven-year deal worth $60MM, according to ESPN.com’s Adam Schefter (on Twitter). The pact also includes $10MM in incentives that could boost the overall value to $70MM. It’s an eye-popping contract, given Rhule’s lack of pro experience, and positions him as one of the highest-paid coaches in the league. The Panthers will also have to take care of Rhule’s buyout with Baylor, which is believed to be upwards of $15MM.

The two sides are currently hashing out terms of a deal. Once finalized, the deal will likely place him in the top half of NFL head coaching salaries, even though Rhule has limited pro experience.

Rhule’s sole season in the NFL came with the Giants, where he served as an assistant offensive line coach in 2012. As a college coach, Rhule went 47-43 in seven seasons at Temple and Baylor. That record doesn’t necessarily jump off of the page, but NFL teams have taken notice of Baylor’s quick turnaround from the Art Briles era under Rhule’s watch.

Baylor went 1-11 in Rhule’s first season at the helm in 2017, but, this year, the Bears reached the Sugar Bowl. Baylor lost to Georgia, but that had no bearing on Rhule’s red-hot candidacy. The Panthers and Giants were both gung-ho on him and he also rejected an opportunity to interview for the Browns’ post.

Rhule takes the place of Ron Rivera, who was fired after eight-plus seasons as the Panthers’ head coach. The Panthers are coming off of a challenging season, but there’s plenty of talent for Rhule to work with. In Carolina, the focus now shifts to the future of Cam Newton, who could be let go as a part of the team’s rebuilding efforts.