The Texans are making a change at defensive coordinator. Anthony Weaver has been promoted from defensive line coach to take over for Romeo Crennel, as Adam Schefter of ESPN.com tweets. 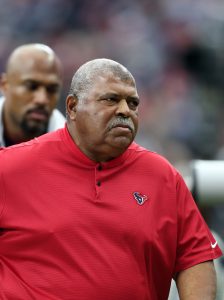 Crennel was said to be considering retirement. It’s not immediately clear whether the 72-year-old will walk away from the game or return to the team in some sort of advisory capacity. The former Browns and Chiefs head coach served as defensive coordinator from 2014-16 and returned to that role in 2018, after Mike Vrabel became the Titans’ HC. All in all, he’s spent 38 years as an NFL coach.

The Texans ranked 19th in defensive DVOA in 2019 and just fired outside linebackers coach John Pagano. Crennel’s defense is coming off a brutal divisional-round showing, when the Chiefs erased a 24-point deficit by halftime in a 51-31 rout.

Weaver, 39, played with the Texans for three seasons in the 2000s and has coached in Houston for the past four years.