The Falcons would like to re-sign two of their key players, but they won’t stop them from testing the open waters. Tight ends Austin Hooper and De’Vondre Campbell will be permitted to explore free agency, GM Thomas Dimitroff told reporters on Tuesday morning (Twitter link via NFL.com’s Ian Rapoport). 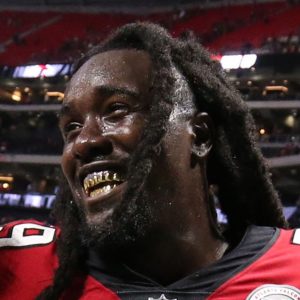 As of this writing, the Falcons have approximately $5MM in cap room. They can carve out more by shedding running back Devonta Freeman, safety Keanu Neal, offensive tackle Ty Sambrailo, defensive lineman Allen Bailey, and other veterans, but their cap situation will be tight regardless. Meanwhile, they have other areas to address, including the secondary.

Hooper took full advantage of his walk year, reeling in 75 catches, 787 yards, and six touchdowns in just 13 games. He’s a dynamic threat at the tight end position with two 70-catch seasons under his belt and it’s expected that he’ll be lavished with big money offers when the bell rings in March. Hooper is still just 25 (he turns 26 in November) and retaining him would require a top-of-the-market deal.

At one point in January, the Falcons and Campbell were discussing an extension. But, over the last few weeks, those talks between Dimitroff and agent Drew Rosenhaus have slowed down. Last year, Campbell led the Falcons in tackles for the second straight year and turned in a perfect attendance record for the third straight season. As a young and elite run-stopper, Campbell may have also priced himself out of Atlanta.