Tom Brady isn’t the only big name on the Raiders’ list of targets. Vincent Bonsignore of the Las Vegas Review-Journal reports that the team is expected to show “legitimate interest” in cornerback Byron Jones. 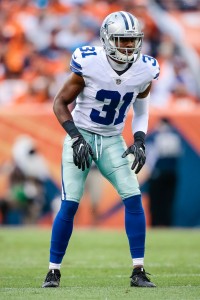 The Raiders are sitting on more than $50MM in cap space, and they could naturally use some reinforcement on defense. While 2019 second-rounder Trayvon Mullen showed that he can be a dependable starter, pairing him with someone of Jones’ caliber could create one of the top tandems in the league.

Jones has spent his entire career with the Cowboys, and he earned a Pro Bowl nod and second-team All-Pro recognition during the 2018 season. This past year, he finished with 46 tackles, six passes defended, and one forced fumble. Bonsignore notes that he only allowed 106 yards after the catch last season.

With the Cowboys focused on retaining Dak Prescott and wideout Amari Cooper, it’s been expected that Jones will end up switching squads this offseason (although Dallas “will at least do their due diligence” on the defensive back). Jones will be joined at the top of the cornerback market by James Bradberry and Chris Harris.