Several teams expressed interest in Austin Hooper, who became the first free agent to agree to a deal after the tampering period began. While the Browns won the bidding, they beat out a team with a much bigger tight end need. 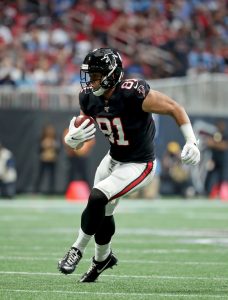 Seeing their first- and second-string tight ends miss almost all of last season, and each now off the roster, the Redskins emerged as an early Hooper suitor. And the former Falcons tight end confirmed his final decision came down to the Browns and Redskins.

“It really came down to Cleveland and Washington. At the end, I chose to be a Brown,” Hooper said during a Sirius XM Radio interview (via NBC Sports Washington). “Redskins were definitely a team that had shown interest I would say. Definitely a solid organization with another talented young quarterback, so that was going to be my next landing spot.”

The Redskins have moved forward without Jordan Reed and Vernon Davis, releasing the former and seeing the latter retire. Ron Rivera pursued a Greg Olsen reunion, but the longtime Panthers tight end chose the Seahawks. Washington has since added Richard Rodgers and former quarterback Logan Thomas but likely is not done restocking this position group.

The Bears and Packers joined the Redskins in the Hooper mix, but the Browns — despite their David Njoku employment — won out with a $10.5MM-per-year offer. Chicago submitted a surprising offer to Jimmy Graham (two years, $16MM), while Green Bay re-signed Marcedes Lewis.