Dontari Poe is coming to Dallas. On Wednesday, the Cowboys agreed to sign the defensive tackle, as Ian Rapoport of NFL.com tweets. 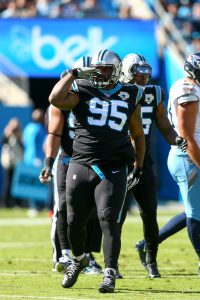 Exact terms of the deal are not yet known and the two sides are still hashing out the fine print, but a (virtual) handshake agreement is in place. Poe figures to play a key role for the Cowboys, who are looking to remake their defensive line this offseason.

Poe, a 346-pound force, spent the last two seasons with the Panthers. This year, the club declined his option for the 2020 season, placing him on the free agent pile.

The Cowboys cast a wide net for defensive line help after losing Robert Quinn and Maliek Collins in free agency. Earlier this month, they landed fellow ex-Panthers notable Gerald McCoy, but they also did their homework on Ndamukong Suh, Damon Harrison, Mike Pennel, and others.

Poe made the Pro Bowl in 2013 and 2014 while he was with the Chiefs. Last year, he managed four sacks from the interior, despite being limited to just eleven regular season games. Historically, he’s been durable – before 2019, he never missed more than one contest in any campaign.