The Broncos have themselves a new cornerback. On Tuesday, GM John Elway struck a deal with the Jaguars to acquire A.J. Bouye, as Mike Klis of 9News tweets. Klis notes in a separate tweet that multiple teams were interested in trading for Bouye, but he preferred to be dealt to Denver, and Jacksonville GM Dave Caldwell made it happen. 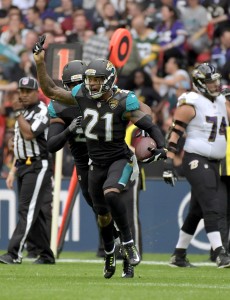 In exchange, the Jaguars will receive a 2020 fourth-round pick (Twitter link via ESPN.com’s Adam Schefter). The trade will be officially processed on March 18, when the new league year kicks off.

The deal, in all likelihood, will mark the end of Chris Harris‘ tenure in Denver. Harris is set for free agency and he was already preparing himself to move on. The arrival of Bouye all but seals it. This also means that the Broncos will be less bullish on this year’s crop of free agent CBs, which includes notables like James Bradberry, Josh Norman, Logan Ryan, and Byron Jones.

Bouye teamed with Jalen Ramsey two years ago to help form one of the most talented secondary units in the NFL and aid the Jags in their run to the AFC title game. Now, that whole group has been revamped.

Instead, the Jaguars are choosing to retool and they’ll have a bevy of draft picks to make that happen. With the trade, they’ll have ten picks in the 2020 NFL Draft, with six of those picks coming in the first four rounds and two in the first round. As Schefter (Twitter link) notes, they’ve also got nine picks in 2021. And, in both years, they’ve got two picks in Round 1 and Round 4. The Jaguars will also have more to spend – by dealing Bouye, the Jaguars have cleared an additional $11.4MM in cap space.

Last year, Bouye recorded 65 tackles and one interception for the Jaguars. Still, he didn’t fit the Jaguars’ plans – Jacksonville would have released Bouye if they didn’t find a deal for him, Ian Rapoport of NFL.com hears (via Twitter).

16 comments on “Jaguars To Trade A.J. Bouye To Broncos”