The Jets’ need for cornerback help could lead to big spending in that area. The Jets are showing interest in pending Cowboys free agent Byron Jones, according to Rich Cimini of ESPN.com. 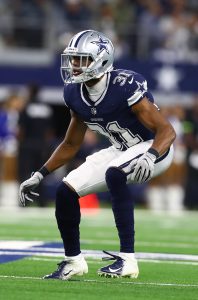 Cimini cautions that GM Joe Douglas might not want to reset the cornerback market with Jones or fellow top FA CB James Bradberry, but it’s a major hole for the Jets and they might not be able to resist the chance to land a top-tier corner. Solid cornerbacks rarely become available, so they tend to get overpaid. Those deals have yielded mixed results – Cimini notes that the Patriots’ big spend on Stephon Gilmore panned out, though others have not.

Jones is only 27 and many expect him to land a deal worth at least $15MM/year. The Eagles, Giants, and Lions, are a few of the teams that could make a play for him, and the list goes on from there. The Broncos, once thought to be a suitor, will probably put their attention elsewhere after landing A.J. Bouye, who will take over for longtime standout Chris Harris.

The cornerback market hasn’t moved much as of late. When the Dolphins re-upped Xavien Howard and made him the highest paid CB in the NFL, his $15.1MM AAV barely edged Josh Norman‘s 2016 deal. Jones could change that: he’s the belle of the ball, and it might take $16MM, or $17MM, per annum to land him.