Three years ago today, the Jaguars landed one of the top defensive free agents on the market. Defensive end Calais Campbell agreed to a four-year, $60MM deal with the club, bringing even more power to the Jaguars’ potent front seven. 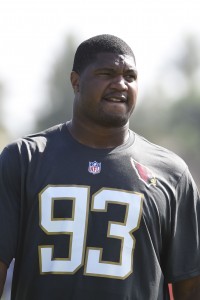 Campbell was thought to be on the radar for a number of clubs in this cycle, including the Titans, Broncos, Colts, Bears, and Redskins (the reported runners-up). The Cardinals, ideally, would have liked to keep him, but the numbers crunch of the offseason made that nearly impossible. Besides, they traded for Chandler Jones one year prior, making Campbell something of a luxury rather than a must-keep player.

Campbell may have been motivated by the Jones acquisition – in his walk year, the 6’8″, 300-pound force tallied eight sacks en route to his second career Pro Bowl appearance. He also entered the market with a proven record of getting to the quarterback: He registered 56.5 sacks over the course of nine seasons in Arizona, a total that’s even more impressive when you consider that he had zero sacks as a rookie in 2008.

This Jaguars front office was not shy about spending on the defensive front and they did it again with Campbell, even though he was entering his age-31 campaign. Presumably, they placed the high bid on the veteran, and it paid off. Campbell logged a career-high 14.5 sacks in his first season with the Jaguars and earned First-Team All-Pro honors for the first time. In the last two seasons, he’s been a Pro Bowler with a combined 17 sacks in that stretch.

Now, the Jaguars have some decisions to make. This year, he’s entering his age-34 season with a projected cap hit of $17.5MM. The Jaguars could save upwards of $15MM by cutting ties, though it would be in their best interest to hammer out an extension that would smooth out his cap hit. With a new deal, the Jaguars can free some some extra dollars to be spent later this month and potentially lock down Campbell for the rest of his career.