The Bears are cutting Trey Burton, according to Ian Rapoport of NFL.com (on Twitter). With that, Burton will hit free agency and try to hook on with another team. 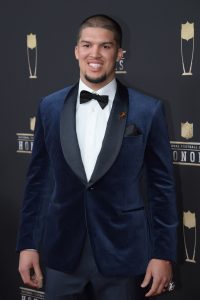 The 28-year-old (29 in October) joined the Bears on a four-year, $32MM deal in 2018. However, thanks to the structure and cash flow of the deal, it was more like a two-year pact. Ultimately, that’s how the Bears treated it. Burton will be designated as a post-June 1 cut saving the Bears roughly $2.8MM in cap space (Twitter link via The Athletic’s Adam Jahns). There’s also offset language in his deal. If another teams signs Burton, the Bears will owe him less than his $4MM guaranteed sum.

Burton spent the majority of his career as a backup for Eagles, sitting behind star Zach Ertz. Over his last two Philly seasons, Burton averaged 30 receptions, 288 yards, and three touchdowns per campaign. Those weren’t eye-popping totals, but the advanced stats showed that he was extremely efficient. In his final season with the Birds, Football Outsiders ranked Burton No. 3 in DVOA among TEs, demonstrating his per-play value.

In Chicago, Burton didn’t break out the way the Bears and many fantasy owners hoped. Burton had 54 catches for 569 yards and six touchdowns in 2018. Last year, a calf injury shut him down in November. He finished out his season with 14 receptions for 84 yards and zero touchdowns.

With Burton gone, the Bears figure to be on the hunt for tight ends in the draft.