Bengals “Maxing Out” Their Time To Talk With Joe Burrow

The Bengals have been using every possible minute to talk with Joe Burrow, Ian Rapoport of NFL.com (on Twitter) hears. That’s just the latest indication that the Bengals will take the LSU quarterback with the No. 1 overall pick in next week’s draft. 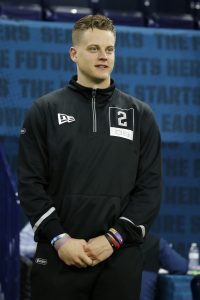 The Bengals’ infatuation with Burrow has been the worst kept secret in the NFL for months. We’ve been surprised before in the NFL Draft, but it would be a genuine shock if the Bengals selected anyone else.

In the days before the draft, teams do their best to run misdirection plays, anonymously downplaying their targets and signaling interest the players they don’t want. Still, the Bengals haven’t been able to hide their crush, nor have they made a real effort to conceal it.

“It doesn’t look that way,” confessed head coach Zac Taylor when asked about the possibility of trading the pick. “If there is a guy there that you believe in that can really change the franchise over the next 10-15 years, then that’s a hard thing to pass up on.”

Even in January, the Bengals were up-front about their affinity for the LSU star.

“He’s got natural pocket feel. He feels it,” Bengals offensive coordinator Brian Callahan said. “It seems like he never takes his eyes off down the field. He extends the play really, really well. He’s a lot faster than you might assume when you see him running away from all those SEC guys. He’s got incredible up-field accuracy. The ball hardly ever hits the ground in a game, which is rare. He just naturally puts the ball in places where those guys can make plays.”

There will be lots of surprises in store throughout draft weekend, but the Bengals seem locked on Burrow with the top pick.