Eagles Tried To Trade Up For CeeDee Lamb

In one of Thursday night’s biggest surprises, the Cowboys landed wide receiver CeeDee Lamb at No. 17. The Eagles tried to catch him as he fell by trading up to the Falcons No. 16 pick, Ed Werder of ESPN.com (on Twitter) hears, but they were unable to get a deal done. 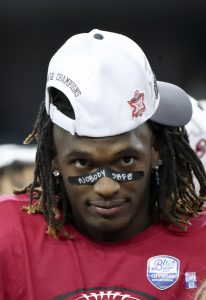 Few expected the Cowboys to go WR in the first round, but Jerry Jones took advantage of the opportunity that fell into his lap. And, some say, he came away with the best receiver in a class chock full of exceptional talent. Meanwhile, the Eagles stood pat at No. 21 and nabbed Jalen Reagor, who offers phenomenal speed backed by his sub-4.3-second 40-yard-dash time.

Most prognosticators and insiders believed that Lamb would not be available beyond the Raiders’ No. 12 pick. The Jets, at No. 11, were also a prime landing spot for the 2019 consensus All-American. When Gang Green opted for the braun of Mekhi Becton and the Raiders chose Alabama speedster Henry Ruggs instead, Lamb was left to wait nervously in his living room.

It’s not clear what the Eagles were offering the Falcons to slide back five spots, but it wasn’t enough for them to risk losing out on A.J. Terrell. Eagles fans may be a little extra grumpy about the Cowboys’ big score after learning of the trade attempt, but the Birds can’t be too mad about “settling” for the blazing speed of Reagor.

Lamb finished last season with 62 catches for 1,327 yards and 14 touchdowns. That was Lamb’s second consecutive season with at least 1,000 yards and 10+ scores.

21 comments on “Eagles Tried To Trade Up For CeeDee Lamb”