The Colts will decline the fifth-year option on Malik Hooker‘s contract, according to Albert Breer of Sports Illustrated (on Twitter). With that, Hooker is set to be a free agent following the 2020 season. 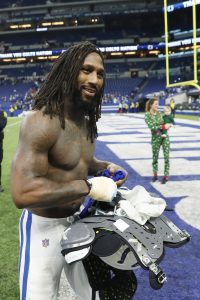 It’s a surprising decision – Hooker has seven career interceptions in just 34 games played and his would-be 2021 salary wasn’t prohibitive. Hooker, who was the No. 15 overall pick in the 2017 draft, would have cost $6.7MM to cuff for ’21, and that sum would have been guaranteed for injury only.

After Haason Reddick‘s option was (predictably) declined by the Cardinals, Hooker was left standing as the only 2017 first-round pick in limbo. The Colts waited right until the deadline to render their verdict and it’s a puzzling one. To be fair: Hooker has been hampered by injuries over the years. To be critical, again: He still offers tons of potential and he might just price himself out of Indianapolis with a big prove-it year.

Hooker likely would have been a Top 10 pick three years ago if not for injuries. With concerns about his surgically-repaired sports hernia and a torn labrum, the Colts landed him in the middle of the first round. And, as a rookie, he missed more than half of the season with a torn ACL. He hasn’t met all of his combine week expectations as a pro, but he still has time on his side. The Ohio State product just turned 24 in April and there are plenty of teams who would be happy to have him when he turns 25.

For now, the Colts’ safety group includes Hooker, rising sophomore Khari Willis, third-round pick Julian Blackmon, George Odum, and Rolan Milligan. Of that group, only Willis is under contract beyond ’20.