Shortly after the Chiefs brought back Matt Moore, they are moving on from Shea Patterson. The defending Super Bowl champions will waive the rookie UDFA quarterback, Field Yates of ESPN.com tweets. 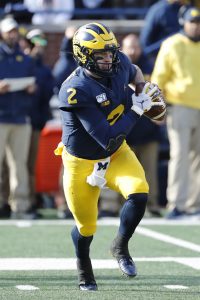 Kansas City signed the former Michigan Wolverines starter shortly after the draft, doing so following their addition of XFL passer Jordan Ta’amu. The Chiefs will drop from five quarterbacks to four with this move, going forward with Chad Henne, Moore and Ta’amu behind Patrick Mahomes.

Patterson loomed as a possible early-entry candidate ahead of the 2019 draft and was rumored as a later-round pick this year. Neither scenario transpired for the former Big Ten standout. Patterson combined for 45 touchdown passes and 15 interceptions over the past two seasons.

With the COVID-19 pandemic nixing teams’ onsite offseason work, rookies are set for uphill battles going into training camps. Quarterbacks’ learning curves being what they are, the UDFA passers teams signed will be in for more hurdles than normal once training camps start — if they are to begin on time.

The Chiefs will go with one of the most experienced backup quarterback groups in recent memory. Moore and Henne came into the league in 2007 and ’08, respectively. Ta’amu profiles as a practice squad candidate.