The Jaguars have agreed to terms with second-round wide receiver Laviska Shenault, according to Field Yates of ESPN.com (Twitter link). 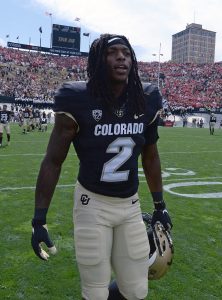 Shenault’s explosive abilities were often on display during his three seasons at Colorado, and Joe Marino of The Draft Network points to Shenault’s run-after-the-catch talent as his most promising trait. Sub-par quarterback play at Colorado meant that Shenault didn’t always post eye-catching numbers, but he did top the 1,000-yard mark in 2018 (before falling back to just 764 yards a season ago).

In Jacksonville, D.J. Chark and Dede Westbrook are virtually assured of commanding two of the Jaguars’ starting receiver roles in three-wide sets. Shenault, then, will likely compete with the likes of Chris Conley and Keelan Cole to become Jacksonville’s third pass-catcher.

As the 42nd overall pick, Shenault’s four-year contract will be worth something in the neighborhood of $7.696MM, according to Over the Cap. He should receive a signing bonus of $3.157MM and have a 2020 cap charge of $1.399MM.

Jacksonville now has five members of its 12-man draft class under contract. Here’s the full list: