No. 3 overall pick Jeff Okudah has agreed to terms with the Lions on his rookie deal (Twitter link via NFL.com’s Ian Rapoport). Per the terms of his slot, the cornerback will earn just over $33.5MM over the course of his four-year deal with a $21.9MM signing bonus. 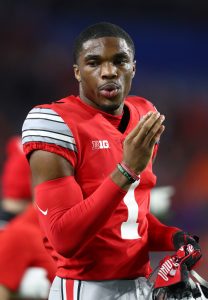 The Lions’ affection for Okudah was hardly a secret in the build up to the draft. After all, the Ohio State product filled the team’s greatest need, after they shipped Darius Slay to the Eagles. There were other draft crushes on the board, like Auburn defensive tackle Derrick Brown and Clemson standout Isaiah Simmons, but they couldn’t let Okudah pass them by.

There aren’t many knocks on Okudah, and the experts say that his ceiling is sky high. In the long run, he has the tools to become one of the league’s better cornerbacks. He also figures to shore up the Lions’ D right out of the gate, with support from Desmond Trufant, Justin Coleman, and Darryl Roberts.

Here’s the full rundown of the Lions’ draft, via PFR’s tracker: