The Lions have agreed to trade Michael Jackson to the Patriots, as Ian Rapoport of NFL.com tweets. In exchange, the Pats will send an undisclosed 2022 draft pick to Detroit. 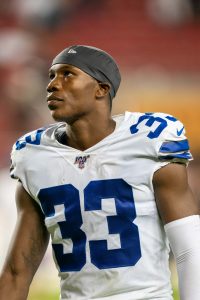 Jackson was initially set to be released, along with former first-round pick Joshua Garnett and others. Instead, the Patriots have made a low-cost move to leapfrog the rest of the waiver wire.

Jackson will give the Pats some additional secondary depth to consider after safety Patrick Chung exercised his right to opt out of the 2020 season. As far as the first-string goes, the Patriots can probably stand pat with Adrian Phillips and second-round rookie Kyle Duggar can slot in opposite Devin McCourty. The Pats still have holes to fill at tackle and linebacker, but they also have more than $33MM in cap space thanks to their league-high eight opt-outs.

Jackson, 23, entered the league as a fifth-round pick of the Cowboys. The University of Miami product has suited up for just one game in his pro career.