The Chiefs are nearing new six-year deals with head coach Andy Reid and GM Brett Veach, according to Tom Pelissero of NFL.com (on Twitter). Once finalized, the Chiefs will have their chief architects under contract through the 2025 season. 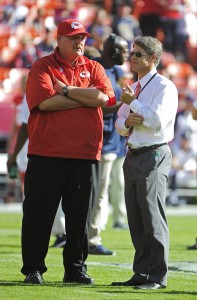 The Chiefs dazzled the league last year en route to capturing the championship trophy. Reid and Veach have been laying the groundwork ever since they joined the organization in 2013. Reid has led to the Chiefs to the postseason in six of his seven seasons on the sideline and Veach has been a key part of the front office for that entire stretch. Starting out as a scout, Veach climbed the ranks to GM in 2017.

There’s no guarantee that Reid, 62, will finish out his new contract, though he says that he has no immediate plans to retire. He’s gone 77-35 across seven seasons with the Chiefs and another seven wins this season would move him past Paul Brown for sixth on the all-time wins list. Reid is currently the NFL’s fifth-oldest active HC — behind Pete Carroll, Bill Belichick, Bruce Arians and Mike Zimmer. This will be Reid’s 22nd season as a head coach, and it won’t be his last.