The NFL debut of Justin Herbert is coming in unexpected fashion. Just moments before kickoff, the Chargers announced the rookie first-rounder would be making his first career start. 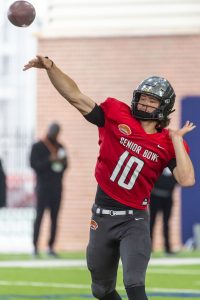 In an unusual situation, normal starter Tyrod Taylor apparently injured his chest during pregame warmups and needed to be pulled. That meant the sixth overall pick of April’s draft was suddenly thrust into his first real action without being prepped for it against the defending Super Bowl champion Chiefs.

He certainly didn’t look overwhelmed initially, scoring a touchdown on his first pro drive. There’s no word yet on how serious the injury to Taylor is, but we’ll be sure to pass on word to you shortly. Taylor entered the season as the starter, but it was likely only a matter of time before the Oregon product took over anyway.

Los Angeles escaped with a narrow victory over the Bengals in Week 1, but Taylor didn’t play too well and failed to move the offense consistently. If Herbert plays well today against Kansas City he probably won’t be relinquishing the job regardless of Taylor’s health.

2 comments on “Justin Herbert Starts At QB For Chargers”