Some conflicting accounts emerged Tuesday after the cancellation of Earl Thomas‘ Texans workout. The All-Pro safety’s agents indicate Bill O’Brien informed them that the NFL informed him to nix Thomas’ workout because of COVID-19 concerns, per Adam Schefter of ESPN.com (on Twitter). 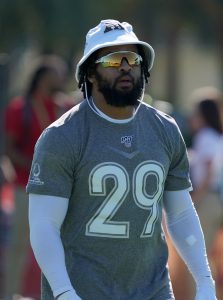 Thomas’ Houston audition was scheduled for Tuesday, but the Texans reportedly sent him home. The Texans are somewhat connected to the Titans-Vikings coronavirus situation, in being scheduled to host the Vikes on Sunday. However, the Texans worked out four other players Tuesday, Howard Balzer of SI.com tweets.

Another report points to the Texans souring on Thomas. The Texans were previously reported to be the likely destination for the former Seahawks and Ravens defender, but the Houston Chronicle’s John McClain notes that internal team discussions determined Thomas would not be a good fit (Twitter link).

The Ravens released Thomas in August after a practice skirmish with fellow Baltimore safety Chuck Clark. Ravens veterans supported the move. Other teams — most notably the Cowboys — have been connected to Thomas, but the Texans visit marked the most newsworthy development since the 31-year-old safety became a free agent. Interestingly, an August report categorized the Texans as a non-suitor as well.

While the Texans door may not be fully closed, the 10-year veteran remains unattached as October looms. Houston has used third-year starter Justin Reid and March free agency addition Eric Murray as its first-string safeties this season.