Another running back is inking a sizable extension. NFL.com’s Ian Rapoport reports (via Twitter) that running back Alvin Kamara has signed a five-year extension with the Saints. The deal is worth $75MM in new money ($77.133MM overall), including a $15MM signing bonus. Rapoport adds that Kamara will earn$34.333MM in guaranteed money. 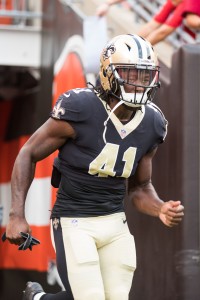 It’s been a tumultuous few weeks for the two sides. At one point, Kamara was skipping practices, and subsequent reports indicated that the Saints would consider moving the Pro Bowler in a trade (in exchange for a first-rounder, of course). Then, earlier this week, we learned that an extension was “extremely close,” an indication that the two sides apparently made up.

Christian McCaffrey‘s record-setting $16MM-AAV deal still leads the running back position, but Kamara will be right behind him at $15MM per year. Dalvin Cook also inked an extension today that’ll be worth $12.6MM per season, and Joe Mixon previously signed a deal that will pay him $12MM a year. Austin Ekeler (UDFA) and Kareem Hunt are among the other running backs from the 2017 class to earn extensions, with the likes of Aaron Jones and James Conner still waiting for theirs.

Since 2017, Kamara has registered an eye-popping 4,476 yards from scrimmage, teaming up with Drew Brees and Michael Thomas to form one of the best offensive trios in the NFL. The former third-round pick has earned three Pro Bowl nods, second-team All-Pro recognition, and a number of rookie accolades.