The Cowboys are still only a half-game back in the race for the NFC East and could move into sole possession of first place with a win this weekend, but might they be packing it in already? Dallas has “made it known” that veteran defensive end Everson Griffen is available for trade, Ian Rapoport of NFL Network tweets. 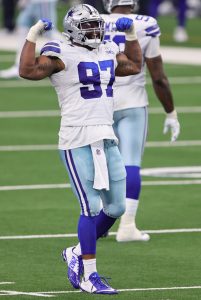 Rapoport’s tweet makes it sound like the Cowboys are looking to unload the roughly half of his $6MM salary left on the books to a contending team. It’s perhaps the biggest sign yet of just how disastrous things have gotten for the Cowboys in such a short amount of time. Just a few weeks ago the notion of Dallas being sellers at the trade deadline would’ve been unfathomable. If this report is true, then it’ll be interesting to see what other moves they might make before next Tuesday.

For a team that entered the year with Super Bowl aspirations, it’s a pretty dramatic admission of defeat. Obviously the impact of Dak Prescott‘s injury can’t be overstated, but the defense has been a complete mess and the coaching staff led by Mike McCarthy appears on the verge of losing the locker room.

Griffen, 33 in December, signed with the Cowboys in August looking to compete for a title. He’s been playing a little over half of the defensive snaps this season, racking up 20 tackles and 2.5 sacks through seven games. Griffen has made the Pro Bowl in four of the past five seasons, including last year when he had eight sacks with Minnesota, so a number of contenders could be interested despite his relatively advanced age.

There are a handful of suitors that make sense, as teams like the Seahawks and Cardinals look in line for playoff spots but don’t have much of a pass-rush. We heard the Cardinals were interested in him as a free agent earlier this offseason and they’re now without star pass-rusher Chandler Jones for the rest of the year, so they could make a lot of sense. The Packers were another team engaged in discussions with the USC product as recently as late July.

All of this being said, the report is apparently news to Griffen himself. Griffen said “I don’t think the Cowboys want to trade me. I haven’t heard that,” when asked by Josina Anderson of ESPN (Twitter link). Meanwhile a source told Anderson that teams have called, but the Cowboys haven’t “shopped him officially.” Assuming he is shipped out it would mean more playing time for Randy Gregory, who only played six defensive snaps this past weekend in his first action since 2018.