The Eagles fear that wide receiver DeSean Jackson suffered a high ankle sprain in Thursday night’s win over the Giants, according to NFL.com’s Ian Rapoport (on Twitter). Jackson and the Birds will know more this afternoon, once his MRI results come in. Depending on the outcome, Jackson may be scheduled surgery. 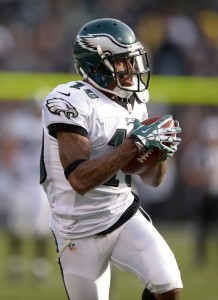 Jackson hauled in three catches for 34 yards before he injured his leg on a punt return late in the game. Madre Harper knocked him down and Corey Ballentine‘s followup hit awkwardly pinned his leg. Jackson then had to be helped off of the field and carted to the locker room.

Jackson, who was just coming off of a hamstring injury, has 13 catches for 155 yards through four games. Hopefully, his ankle injury won’t cap his season in October. Last year, Jackson underwent core muscle surgery in November, capping his 2019 season after just three games played.

DJax, 34 in November, notched 41 catches for 774 yards and four touchdowns in 2018, his last healthy season. Though that was far from his usual stat line, the legendary deep threat still averaged 18.9 yards per grab that year to lead the NFL.