Browns cornerback Denzel Ward will likely miss multiple weeks with a calf strain, sources tell NFL.com’s Mike Garafolo (on Twitter). Ward suffered the injury sometime during Sunday’s win over the Eagles, one of his best individual performances of the year. 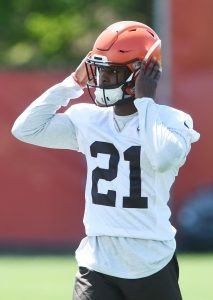 “Denzel is a warrior,’’ teammate B.J. Goodson said (via Mary Kay Cabot of Cleveland.com). “I get excited when he makes plays. I didn’t sense any type of injury from him. I guess we will just see how that goes and hope for the best.”

Frankly, it was hard for anyone to tell. Ward broke up four passes, pressured Wentz into a pick six, and intercepted him late in the game to ice the win. Ward, who was on the field for every snap, now leads the NFL with 15 passes defensed.

At minimum, Ward will be out for this week’s game against the Jaguars — ditto for teammate Myles Garrett, who will remain on the COVID-19/Reserve list. Beyond that, his status is murky for key games against the Titans and Ravens.