Ahead of a key Thursday game against the Chargers, the Raiders are set to be without their field-stretching rookie wideout. They placed Henry Ruggs on their reserve/COVID-19 list Tuesday. 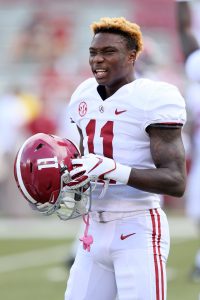 While the Raiders have not gotten as much from Ruggs statistically as some of the other teams who drafted receivers this year, the Alabama product has helped the team’s offense as a deep threat.

It is not yet known if Ruggs tested positive for the coronavirus or qualifies as a high-risk close contact. Either scenario would, however, give him an opening to play in Week 16. This makes for another setback for the 2020 draft’s top wideout selected. He missed much of Las Vegas’ offseason program after suffering an off-field injury and missed time earlier this season because of a hamstring malady.

Ruggs is averaging 18.0 yards per catch this season, hauling in 23 passes for 414 yards and two touchdowns. The coveted prospect has seen low-cost UFA Nelson Agholor operate as Las Vegas’ top outside receiver as of late.

The Raiders also promoted Vic Beasley from their practice squad. The Raiders’ loss to the Colts bumped them back to the “In the Hunt” tier of the AFC playoff picture, placing obvious importance on their Week 15 game against the Bolts.