The Eagles will hire Shane Steichen as their new offensive coordinator (Twitter link via Ian Rapoport of NFL.com). The deal will likely become official sometime this week. 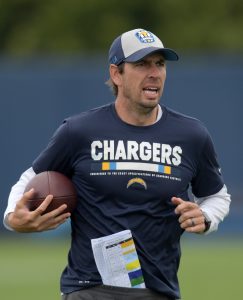 Steichen has history with new head coach Nick Sirianni – the two worked together with the Chargers from 2014 through 2017. Most recently, Steichen served as the offensive coordinator in Los Angeles, guiding Justin Herbert in his tremendous rookie season. Some believed that Steichen would be a candidate for the Seahawks opening, following Brian Schottenheimer‘s firing, but he’s heading out east instead.

The Bolts promoted Steichen from quarterbacks coach to OC in October 2019 after Ken Whisenhunt‘s offense tanked. Under Whisenhunt, the run game was downright pitiful: The Chargers went four straight games without achieving 40 yards rushing, leaving them in the bottom third of the league in points. With Steichen at the helm, things improved – the Chargers finished out that year ranked No. 12 in DVOA.

Now, the 35-year-old will be tasked with getting Carson Wentz back on track. He’ll also have to hire a new assistant to help with the run game with Duce Staley leaving.