The Lions are set to interview Saints assistant Dan Campbell in the coming days, according to Ian Rapoport of NFL.com (on Twitter). The club has also formally scheduled an interview with Buccaneers defensive coordinator Todd Bowles. 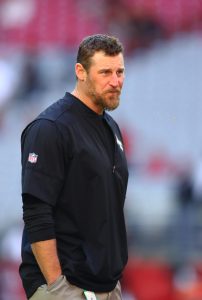 Campbell moved up the coaching ranks soon after retiring in 2021. Starting as a coaching intern with the Dolphins in 2010, he advanced to Miami’s interim head coach in 2015. After impressing in that brief run, he hooked on with the Saints. A few years later, the Dolphins requested an interview, but he had no interest in a South Beach reunion. He did, however, say yes to the Browns, Cardinals, and Packers.

Bowles, who had just 24 wins across four seasons as the Jets’ head coach, reported to be on the Lions’ list a few days ago. Here’s the current list, via PFR’s 2021 NFL Head Coaching Search Tracker: