Multiple NFL teams have inquired about Northwestern head coach Pat Fitzgerald. But, as of this writing, he has not agreed to interview with any of them (Twitter link via ESPN.com’s Adam Schefter). 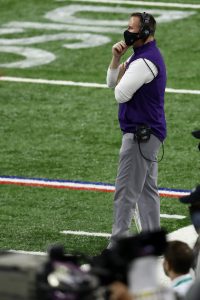 The Falcons, Lions, and Texans have all been connected to Fitzgerald, though it’s hard to see him landing in Houston. Reportedly, the Texans aren’t interested in pulling a coach from the college ranks. Instead, they’re chatting with experienced NFL coaches like Panthers offensive coordinator Joe Brady and Titans offensive coordinator Arthur Smith. Colts defensive coordinator Matt Eberflus was also on that list, but he declined.

Fitzgerald has coached the Wildcats to three 10-win seasons since taking over in 2006. That was no small feat, considering the program’s underwhelming track record. Fitzgerald, 46, has come up in NFL conversations before, but he didn’t generate much buzz last year. If Fitzgerald turns pro, he’ll be the third college coach to do so in the past three years, following Kliff Kingsbury and Matt Rhule.

It’s worth noting that Northwestern is Fitzgerald’s alma mater and he’s referred to his current position as his “dream job.” Some coaches play hard to get, but Fitzgerald’s trepidation might be sincere.

18 comments on “Pat Fitzgerald To Pass On NFL Interviews?”