Raiders To Interview Gus Bradley For DC, Latest On Search

The Raiders fired defensive coordinator Paul Guenther with a few games left in the season, and now that 2020 is over Jon Gruden needs to find a replacement. The day after Week 17, the search is already heating up. 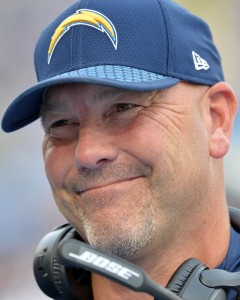 Las Vegas is interested in Chargers DC Gus Bradley and has requested an interview with the former Jaguars head coach, a source told Ian Rapoport of NFL Network (Twitter link). With Los Angeles firing Anthony Lynn Monday, it appears unlikely Bradley will be back with the Chargers in 2021, so it’d be surprising if they blocked the interview. Rapoport calls him a “top candidate” for the job of turning around the Raiders’ lackluster defense.

Bradley’s defenses have played at a high level at times during his four years with the Chargers, but they also severely underperformed their talent this season. Of course he was also dealt some unlucky blows, like the significant injuries to guys like Derwin James, Chris Harris, Melvin Ingram, and Joey Bosa. Bradley had an uninspiring run as the Jags’ head coach from 2013-16, where he went 14-48. He initially received recognition for coordinating the Seahawks’ impressive defense from 2009-12.

If Bradley doesn’t end up with the gig, Rapoport identifies a couple of other potential candidates as well. That being Falcons interim head coach Raheem Morris and Rams linebackers coach Joe Barry. As Rapsheet notes, Morris could land a head coaching job this cycle.

Interestingly, Morris coached under Gruden in Tampa Bay, and then took over as the Bucs’ head coach in 2009 when Gruden was fired. Barry was also on Gruden’s Tampa Bay staff, and has been an assistant head coach/linebackers coach under Sean McVay the past four seasons.

11 comments on “Raiders To Interview Gus Bradley For DC, Latest On Search”