Bears Did Not Make Offer For Carson Wentz

One of the two known Carson Wentz suitors during this trade saga, the Bears do not appear to have presented legitimate competition to the Colts for the former Eagles quarterback. 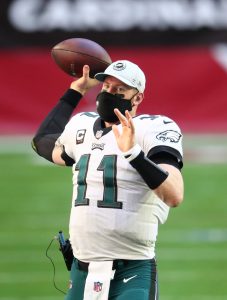 The Bears did discuss Wentz with the Eagles, but Jay Glazer of Fox Sports tweets the team did not make an offer for the former No. 2 overall pick. Chicago backed out of the trade talks recently, according to Adam Caplan of Sirius XM Radio (on Twitter). The Colts concluded the race by sending a 2021 third-round pick and a conditional 2022 second-rounder to the Eagles to land Frank Reich‘s former pupil.

Regardless of the Bears’ finishing position in the respective sweepstakes for Wentz and Matthew Stafford, they remain in search of a quarterback. Chicago does have a first-round pick for the first time since the 2018 draft, but thanks to the team’s late-season resurgence, that selection sits at No. 20 overall.

The Colts, who pick 21st, secured Wentz and will not be in the market for a major trade-up maneuver come April. Although other QBs may well be available for trade in this action-packed offseason, the Bears will be connected to a first-round trade-up going into a crucial year for the Ryan Pace–Matt Nagy regime. Nick Foles remains under Bears control for the 2021 season, on an easily manageable salary ($4MM), but the team will almost certainly bring in a starter-caliber passer via trade, free agency or the draft.

34 comments on “Bears Did Not Make Offer For Carson Wentz”