The Eagles have agreed to trade Carson Wentz to the Colts, according to Adam Schefter and Chris Mortensen of ESPN.com (on Twitter). The deal will send a 2021 third-round pick and a conditional 2022 second-round pick to Philadelphia. That conditional choice could turn into a first-round selection if Wentz plays 75% of the snaps or 70% with a playoff appearance (Twitter link via NFL.com’s Mike Garafolo). 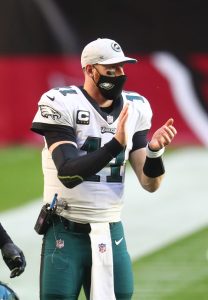 Not long ago, Wentz was a legitimate MVP candidate. Things took a sharp turn in the Eagles’ Super Bowl season when Wentz’s injury gave way to the rise of Nick Foles. When Wentz, he wasn’t the same. Neither was the relationship between him and Doug Pederson. Now, they’re both out of Philadelphia.

Wentz will now try to fill the void left by Philip Rivers‘ retirement. Meanwhile, the Eagles are now poised to turn things over to Jalen Hurts, Wentz’s younger and more athletic counterpart.

There were other suitors for Wentz, but the Colts have long been linked to the former No. 2 overall pick. Three former Eagles coaches — Frank Reich, Mike Groh, and Press Taylor — are on the Colts’ staff, giving Wentz instant familiarity with the offense. The Bears, who have one-time Wentz QB coach John DeFilippo on the staff, were also said to be in the mix. Ditto for the Broncos, though they were lukewarm on him. The Broncos will now try to piece together an even bigger package for someone like Deshaun Watson or Russell Wilson. If they can’t land a top-tier QB, they’ll reportedly stay the course with Drew Lock.

Wentz’s injuries and apparent decline hurt his stock, but his contract was also a limiting factor. On the plus side, his cap number will be tamped down to ~$25MM for Indy, due to guarantees that will remain on the Birds’ books.

The Colts will now have Wentz under contract through 2024. His deal calls for a $25.4MM cap hit this year, with $15.4MM guaranteed and a $10MM roster bonus. In 2022, they’ll have him at a $22MM salary/cap hit, with $15MM locked in. After that, the guarantees dissipate, giving the Colts an escape hatch should things go awry.

With the Wentz deal, there are now zero first-round QBs from the 2009-2016 drafts with their original teams, as Field Yates of ESPN.com tweets. The deal also marks the trades of the 2016 draft’s No. 1 and No. 2 overall picks, inside of three weeks. Jared Goff — once a rising star in Los Angeles — was shipped to the Lions for Matthew Stafford just days ago.