The Broncos aren’t all that interested in Carson Wentz, as James Palmer of NFL.com tweets. The Broncos have been linked to the Eagles QB, but they’re mostly targeting the top tier options on the market, rather than signal callers like Wentz. 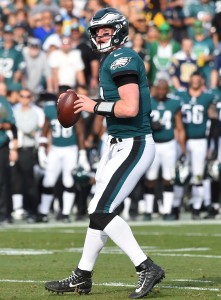 That top tier includes Deshaun Watson, if the Texans are willing to move him. Ditto for Russell Wilson, though it’s not quite clear if the Seahawks will seriously entertain offers. The Broncos pursued Matthew Stafford earlier this offseason, before he was shipped to the Rams, an indication that they saw Stafford as a potential upgrade to Drew Lock. In the case of Wentz, they are not so sure.

Lock didn’t have a banner year in 2020, throwing 15 interceptions in 13 games. However, he did finish strong in the final quarter of the regular season, posting seven touchdowns against just two interceptions. Denver’s top decision makers believe that Lock could build on that, making him a better option in 2021 than the former No. 2 overall pick.

Meanwhile, Watson has the Broncos on his list of preferred destinations, which would make Kareem Jackson very happy. Still, the Dolphins and 49ers are said to be even higher on Watson’s list. Ultimately, this could all lead the Broncos to stick with Lock and put their resources elsewhere in March.