Two of the best players in Cardinals history are set for free agency in March. While the Cardinals do not have to worry about Larry Fitzgerald defecting to another team, with the future Hall of Famer indicating he would only play for the Cards, Patrick Peterson could leave after 10 seasons in Arizona. 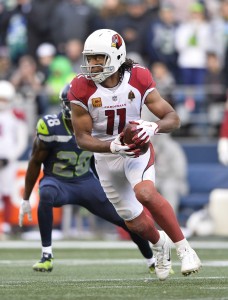 After Michael Bidwill indicated the Cardinals would like to bring back Peterson, GM Steve Keim confirmed he has spoken with the eight-time Pro Bowler this offseason, according to the Arizona Republic’s Bob McManamon.

Keim stopped short of saying he would like to extend Peterson before he hits the market, citing the salary cap uncertainty as a key reason he did not have a clear idea of the All-Decade defender’s place with the 2021 Cardinals.

Peterson’s play over the past two years has not measured up to his Pro Bowl-level work, and he will turn 31 this year. The Cardinals, however, also have Dre Kirkpatrick set for free agency and have seen Robert Alford miss two full seasons since he signed with Arizona in 2019. The team has a considerable need at cornerback.

The Cardinals are respecting Fitzgerald’s timeline. Keim has not spoken to Fitz this offseason, per McManamon. Like he has for the past few seasons, Fitzgerald is taking time to determine whether he wants to return. The 37-year-old wideout has indicated only a championship will matter for him going forward.

Fitz saw his production tumble in 2020. Although the 17-year veteran missed three games, his 31.5 yards per game represented a career-low figure — by a wide margin. After making $11MM last year, Fitz would almost certainly need to agree to a lower-cost deal if he were to return for an 18th season. Arizona has DeAndre Hopkins signed long-term, but Christian Kirk is going into a contract year after an inconsistent three-season run.