Less than an hour after Kyle Fuller officially became a free agent, he has a deal in place. The Broncos will sign the recently released cornerback, Tom Pelissero of NFL.com tweets.

This pact will reunite Fuller with former Bears defensive coordinator Vic Fangio. The Broncos, who were expected to be interested, will sign Fuller to a one-year deal worth $9.5MM. Fuller’s 2018 All-Pro season came in Fangio’s defense, and he will join ex-Bears teammate Bryce Callahan in Denver. On this quickly developing deal, Fuller will collect $9MM fully guaranteed, per Pelissero. 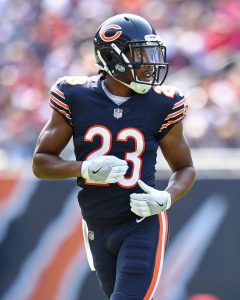 The Broncos freed up some cap space by extending Justin Simmons on Friday. They now have three veterans in place at corner, with Fuller and Ronald Darby joining Callahan. While the Broncos had assembled a top-tier corner crew in the mid-2010s, their No Fly Zone troops are all now either retired or elsewhere. The team lacked depth at this position over the past two seasons but will now boast extensive experience here.

Fuller, 29, struggled early in his Bears career. Chicago did not pick up his fifth-year option in 2017, but after Fuller’s breakthrough 2018 campaign (NFL-high seven interceptions), they gave him the transition tag and matched a Packers offer sheet for him. However, the Bears cut him after seven seasons this week. Fuller made immediate sense for the Broncos, with Fangio having coached him for four seasons. Fuller has made two Pro Bowls — in 2018 and ’19 — and helped the Bears to three straight top-10 DVOA defenses, though Pro Football Focus rated his 2020 work just outside the top 50 at his position.

While the Broncos have three veteran salaries at corner now, none of the cogs are earning more than $10MM per year. Darby is at $10MM annually, while Callahan is going into the third and final year of his $7MM-AAV pact. Callahan played well when available last season, ranking as a top-five corner in the view of Pro Football F0cus, but the standout slot defender has missed 22 games since signing with the Broncos in 2019.

This signing lessens the Broncos’ need at corner, where mock drafters frequently have connected them with their No. 9 overall pick. GM George Paton has (understandably) said quarterback will be in play with that selection.