The Broncos and Justin Simmons have agreed to terms on a long-term deal, according to NFL.com’s Ian Rapoport (on Twitter). It’ll be a four-year, $61MM deal with $35MM guaranteed, as Benjamin Allbright of KOA tweets. ESPN.com’s Adam Schefter (Twitter link) has also confirmed those figures.

The structure of the contract is pretty straightforward. Per Aaron Wilson of the Houston Chronicle (via Twitter), Simmons will take home a $15MM signing bonus, and his $2MM 2021 salary and $14.1MM 2022 salary are guaranteed at signing. He is due a $14.4MM salary in 2023, $2.9MM of which is guaranteed for injury at signing. All $14.4MM will become fully guaranteed if he is on the roster on the fifth day of the 2022 league year. 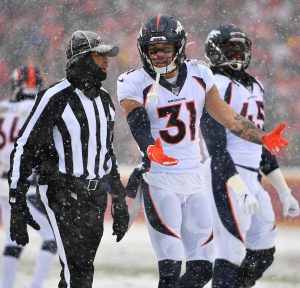 Simmons was tagged for the second-straight time this year, giving the two sides until mid-July to hammer out a multi-year agreement. There’s been strong mutual interest throughout the process, so it’s not a surprise to hear that they’re on the cusp of a fresh pact.

“Justin is one of our core guys. Our goal is to sign him to a long-term deal,” new GM George Paton said recently, with Simmons echoing that sentiment.

Since Simmons received an $11.4MM tag last year, his 2021 price currently sits at $13.7MM — a 20% hike. There are five safeties averaging at least $14MM on their respective long-term contracts, establishing a clear floor for Simmons. The Broncos already have plenty invested at safety, with Kareem Jackson entering the final year of an $11MM-AAV pact, but Simmons is squarely in his prime at 27. He is also coming off his first Pro Bowl season — during which he intercepted a career-high five passes and played every defensive snap for a third straight year. Jackson will be 33 next season.

The sides were not able to complete an extension before the 2020 summer deadline, but Simmons has since proved that he deserves top-five safety money. It’s a tremendous outcome for Simmons, of course, but his shiny new deal also bodes well for other top safeties looking for new contracts. Seahawks star Jamal Adams, for example, can now shoot for the moon in his next round of negotiations.