Dolphins’ Ryan Fitzpatrick To Play In 2021

Despite speculation to the contrary, Ryan Fitzpatrick intends to play in 2021 (Twitter link via NFL.com’s Ian Rapoport). Fitzpatrick is days away from free agency and figures to draw a good amount of interest. 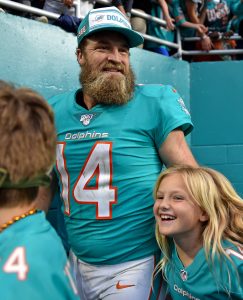 Over the weekend, we heard that the 38-year-old could hang up the cleats. But, publicly, Fitzpatrick has been fairly consistent about his plans. In February, he told Pat McAfee that he still had plenty of gas in the tank.

“For me, personally, I have to take every offseason and reassess,” Fitzpatrick said. “These last two years have really re-lit that fire under me. I still want to play, and I enjoy being out there playing.”

Fitzpatrick opened the year as the Dolphins’ starter before ceding the role to Tua Tagovailoa. However, he was used in relief throughout the year, including his game against the Raiders to secure the win. At this stage of his career, Fitzpatrick might not be able to secure a starting role, but he profiles as one of the best available backup options. If Fitzpatrick is willing to mentor a young QB, he should be able to land a contract as one of the league’s highest-paid QB2s.

After turns with the Rams, Bengals, Bills, Titans, Texans, Jets, Bucs, and Dolphins, the Harvard alum could be on his way to the ninth team of his NFL career.

5 comments on “Dolphins’ Ryan Fitzpatrick To Play In 2021”