New Lions coach Dan Campbell is getting the gang back together. Well not entirely, but he is adding a familiar face to his inaugural defense. 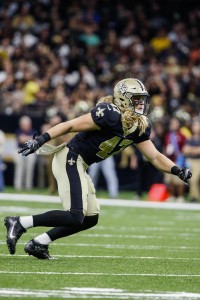 Detroit has agreed to terms on a deal with free agent linebacker Alex Anzalone, a source told Mike Garafolo of NFL Network (Twitter link). It’s a one-year pact worth a modest $1.75MM, he reports. Campbell and Anzalone were together in New Orleans for the past four years when Campbell was an assistant head coach under Sean Payton.

The Saints drafted Anzalone in the third-round back in 2017, and he spent his first four pro seasons with the team. This past season he appeared in all 16 games and started nine, playing almost exactly half of the defensive snaps. He finished with 41 tackles, three for a loss.

The Lions have so far made the defensive line more of a priority, adding guys like Michael Brockers and Charles Harris, and this is their first real addition to the linebacking corp.