The Ravens could be close to making a big addition to their receiving room. Sammy Watkins is on his way to Baltimore to visit with the team, a source told Ian Rapoport of NFL Network (Twitter link). 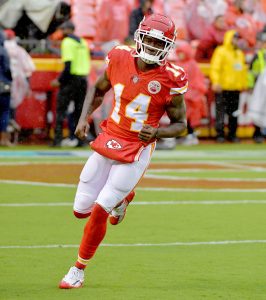 We initially heard right before the Super Bowl that there was mutual interest between Watkins and the Chiefs on a new deal, but then a few weeks ago Kansas City GM Brett Veach made it sound like it’d be hard to work financially, and obviously nothing has materialized. Before this, we haven’t heard of much interest in Watkins since free agency opened as the receiver market was slow to develop initially.

Things appear to be picking up though, with Kenny Golladay and Will Fuller both signing in recent days, and Watkins could be the next domino to fall. As Rapoport points out, the Ravens have been looking to add a wideout in free agency as their group of pass-catchers for Lamar Jackson last year was a bit underwhelming.

Meanwhile, Jeff Zrebiec of The Athletic tweets that there are a couple of connections on Baltimore’s staff. Ravens pass game specialist Keith Williams has been Watkins’ personal receivers coach, and Ravens offensive coordinator Greg Roman coached Watkins in Buffalo.

Baltimore reportedly offered JuJu Smith-Schuster more money, but he chose to re-sign with the Steelers instead. The fourth overall pick of the 2014 draft, Watkins has never quite lived up to his potential but he’s capable of being a very solid player when healthy. In a down year in 2020, he had 37 catches for 421 yards and two touchdowns across ten games. We’ll keep you posted as soon as we hear anything more.