The Steelers are bringing JuJu Smith-Schuster back on a one-year deal, as Adam Schefter of ESPN.com tweets. The wide receiver will earn just $8MM on the team-friendly pact (Twitter link via NFL.com’s Ian Rapoport). And Pittsburgh is playing around with the structure of the deal in order to minimize the 2021 salary cap impact. Per Tom Pelissero of the NFL Network, Smith-Schuster’s deal includes a $7MM signing bonus and a $1MM salary, and the team is adding four voidable years so that the cap hit this season is just $1.6MM (Twitter link). 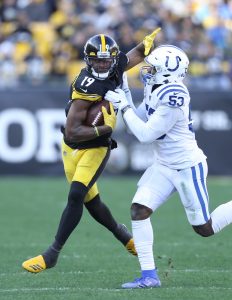 Smith-Schuster could have made more elsewhere, as Taylor Bisciotti of NFL.com tweets. The Chiefs offered him a one-year deal with the same base salary of $8MM, plus $3MM in incentives. The Ravens made an even stronger pitch — $9MM plus $4MM in incentives. Ultimately, Smith-Schuster opted to give the Steelers a home team discount.

“At the end of the day, I want to have my legacy in Pittsburgh and retire there,” Smith-Schuster said in February. “I don’t want to leave…I’m Pittsburgh for life.”

Smith-Schuster’s production tailed off over the last two seasons, putting top-of-the-market money out of his reach. Still, he drew widespread interest. In addition to the aforementioned Ravens and Chiefs, the Jets and Raiders were also connected to the youngster. The Jets wound up signing Corey Davis to a three-year, $37.5MM deal. It’s not clear if they offered a similar deal to Smith-Schuster, or if the wide receiver had interest in joining a non-contender.

Smith-Schuster, still only 24, had just 831 receiving yards last year, but there’s reason to believe that he could get back to his old form with Ben Roethlisberger back under center.